Describing how dynamic microphones work is easy because they rely on the same principles as our own ears.

Sound waves hit a mechanical diaphragm which vibrate a magnate relative to a coil of wire.

This generates an electrical signal which is sent down the output cable.

In the same way, sound strikes our eardrums and travels to nerve endings which produce a signal our brain interprets as sound.

What should you consider when choosing a dynamic mic for your setup?

You might want to use this type of mic for live vocal applications or perhaps to record an amp cranked up to 11.

They also do not require an external power supply, known as Phantom Power, since the signal is generated by the interaction of the magnet inside the mic itself.

In general, dynamic mics tend to be more rugged than their condenser counterparts and are used for more intense (louder) instances in the studio, like miking a guitar amp or a screaming vocal performance for instance. 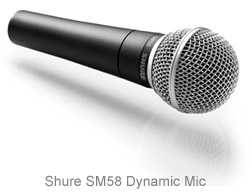 Since they need more of an input signal they don't pick up the ambient sounds of the venue and crowd when compared to a condenser.

The mesh ball on the end is a type of Pop Filter that helps reduce some of the harsh sounds that can come from a spirited vocal performance.

This mic can help you achieve a "live performance" sound in your home recording studio.

Do I Need A Dynamic Microphone?

When I began to make my own home studio I kept reading over and over:

It's been used as a hammer to pound together parts of the stage on the road and still worked that night...blah blah blah".

Listen, you're not looking for a hammer replacement, or even something that can withstand the rigors of life on the road.

I strongly suspect that even if you are looking for a hammer replacement your best bet is... a different hammer... not a microphone.

It turns out I didn't need the SM57, and if you're just starting out you probably don't need a dynamic microphone either.

There are some applications where it would be appropriate (as mentioned above), but chances are at least at first you'll want to take a look into Condenser Mics.

If you decide that it is for you after all but you are hesitant to take the plunge into the $100 microphone world, have no fear.

You can't go wrong with either of the 2 mics shown above.

For a look at the mics I use head over to Microphone Buying Guide Page for a more in depth discussion.