Mixing Consoles (aka Mixer Boards, or just Mixers) are the iconic symbol of the modern recording studio.

But what the devil are these things even for?!?

The overall purpose of these bad boys is to take all your different input signals and... are you ready for this??

It sounds obvious but that is really what it all boils down to.

Let's dig a bit deeper to understand these warlocks.

The first thing to notice is that although they appear very complicated with the seemingly endless rows of switches, knobs, buttons, and dials, a closer look shows that it's really only one line of controls repeated over and over.

And the number of these repeated inputs (known as channels) that you require will be a key consideration on what type of Mixer you choose.

The picture to the left shows one complete set of these controls.

This is where you will connect the working end of your XLR Cables (Top) or 1/4" Instrument Cables (Middle) to the input of each channel. This is where the input signal is introduced to your Mixer.

This board also has a mixer insert input, which is similar in function to the Auxiliary Send discussed more below.

Used to boost a mic-level signal to a line-level signal. Only channels with preamps on them will have gain control dials. Gain defines the input into a channel.

The Auxiliary Send dials (or sometimes just "aux send" or "effects") take the incoming signal and provide a way to send it off to another destination than the rest of the mix.

This can be useful when using hardware effects, so that the original sound can be altered and then re-introduced later down stream.

The equalizer controls allow you to change the characteristics of the output by cutting or boosting the frequencies of each input.

The Hi, Mid, and Low (blue dials) frequencies can be adjusted as well as the Center Frequency (white dial).

This defines where the sound exists in the stereo field. In other words, does the sound seem to be coming out of the left speaker, right speaker, or some combination of the two.

This controls the intensity of the signal as it exits that channel.

Since each channel has this same adjustment you can balance the sounds of each input, which is the essence of what Mixing is all about.

Level defines the output of each channel.

Now for the big question that I know you've been wanting to ask...

Do I Need A Mixing Console For My Recording Studio?!?

Instead of trying to answer that question straight-up...

Let me tell you the types of artist who would be interested in this hardware.

Case 1 - You need more preamp inputs than your audio interface or sound card are providing you.

Or in other words, you want to record several tracks simultaneously (i.e. 2 guitars, 3 vocals, and a drum set... easily > 8 preamps needed).

Case 2 - You have an audio interface with several outputs and want to use a physical mixing console to bring each channel back to the board as you perform your magic during the final mix.

Case 3 - You need preamps for a live application.

This last one is out of place with the rest of what we're trying to do here so I'm gonna skip it, but just know that this is another possible use.

Now for the straight answer...

You Do Not Need a Mixer to Record Yourself at Home.

I wish someone would have just told me this years ago.

They can be useful in certain instances, but you absolutely can record with just an audio interface.

If you are a hands on person and want to touch physical knobs and faders, then you may want to check out Control Surfaces.

They offer a good alternative to using your mouse and keyboard to operate a software based mixer.

Anyway, for those still interested in hearing more about mixers lets move on.

There are 2 main types of mixing console you need to be concerned with: Analog and Digital. 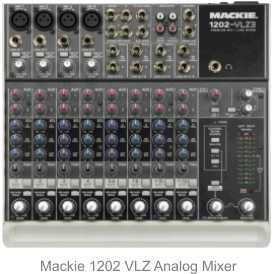 Analog mixers use variable resistors (potentiometers, or pots for short) to physically change the voltages coursing through their electric veins.

By changing the voltages the signal (and therefore the sound it represents) is altered.

One benefit of this is that there is an instant effect when you move a fader knob.

The downside is that they cannot provide effects processing since the signal exists only as a voltage.

Rather you would have to use the "Auxiliary Sends" or "Inserts" to provide any signal processing.

With the arrival of audio interfaces on the music scene, these are slowing being faded out as a recording tool.

As a result you may be able to get one at a good discount as someone else makes the transition to the all-audio-interface setup for their studio.

Just remember that, at least for the analog version of the mixing console, you will need another piece of equipment with A/D Converters in order to record to your computer.

A common mistake is to assume that a mixing console will provide A/D converters, but unless it has a USB or FireWire output it will not. 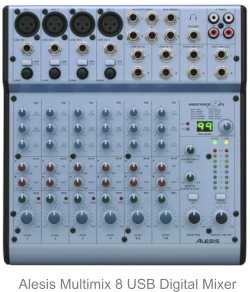 Digital mixer offer the same functionality, but manipulate audio data digitally to change the characteristics of the sound.

Instead of physically controlling the electrons through variable resistors (like the analog version) these convert the signal to digital data right off the bat.

Then using different mathematical equations and algorithms, it alters the signal within the digital realm.

These are a kind of hybrid mixer / audio interface units because they do have A/D Converters on-board and can output the data directly to your DAW via USB or FireWire interface.

As a result, you can add effects such as reverb, echo, phaser, delay, etc. in real-time through the mixing console itself.

This is all transparent to the user, you still turn the knobs just like you would in the analog version.

The one drawback is that through all the conversions between analog to digital, some delays can be introduced to the system, but this is less and less or a problem as the technology continues to mature.

Another pitfall is the recording of multiple tracks at once. Be very careful if you intend to record to more than one track at a time with one of these.

You'll have to pay top dollar (~$1500) for a digital mixer with the ability to record each input channel to it's own dedicated track, something even moderately priced audio interfaces can provide.

The more affordable digital mixers (~$300) will only output the Left/Right main outputs through the USB or FireWire interface.

In other words... all your inputs will be combined to 1 track on your recording software and therefore relative levels, pan position, etc. can't be edited later on during the mix down.

Regardless of the type of audio interface you choose, you'll need some way to mix the signals together during and after recording.

This can be done with either a hardware or software based mixer.

Everything up to this point applies equally to both. It is possible to use a mixing console in conjunction with your Audio Interface.

It's also possible to use only your audio interface's included software mixing package and cut the hardware mixer out completely.

This was easily one of the most confusing things I came across when trying to build my home recording studio.

The good news is that you really can do without this piece of the puzzle and rely solely on your audio interface for your mic preamps.

I found that although I personally like to physically turn the dials and faders on the mixing console itself, I did not enjoy the additional clutter of the many more cables required to make all the connections.

Once I removed the mixing console from my setup I was able to clear up some additional space and eliminate a large cable mess in my recording area.

For now I have my Mackie mixer dedicated to my "live rehearsal setup", which is off to the side and not hooked up to my recording chain. 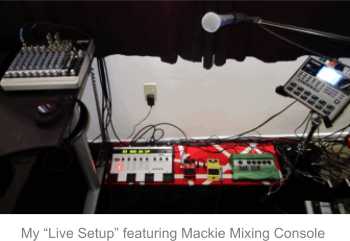 It routes the signals of my dynamic mic, over drive SD-1, Loop Station, Line 6 digital delay, and vocalist live pedals.

I use the on-board monitor output to send everything to the control room sub-mix in my headphones which works great for practicing and playing around.

So in the end the answer to the tricky question of "Mixer vs. No Mixer" is really a personal one.

Don't feel like you are missing out on some essential part of the studio if you decide to go without.

It's just one more tool in your collection that you may choose to add.