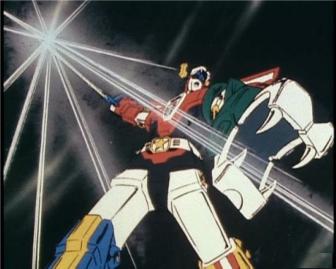 Digital Audio Workstations (DAWs) can be tricky to understand when you are first introduced to them.

Rather than tell you that this is a workstation designed to handle a digital data stream (not helpful), let me tell you what it means for your home recording studio.

It's a combination of a Physical Computer with an Audio Interface and Recording Software installed.

All 3 of these things come together like Voltron to form your Digital Audio Workstation... but unlike Voltron you combine common, affordable products and not futuristic bad-ass robotic lions.

Because the parts of this system are so closely interwoven you may hear the term DAW used to refer to any part on its own or the system as a whole.

So right off the bat you (the home recording beginner) are at a disadvantage because this term, which really applies to 3 different things all combined, is often thrown around haphazardly.

Semantics aside, let's take a look at the different components that make up the hardware portion of your Digital Audio Workstation rig.

Yes! The computer that you probably already have will be the horsepower behind your home recording studio.

Here's a list of the important categories to consider when creating your home recording setup:

You don't have to go for a state-of-the-art screamer here, but a slow processor will be a constant thorn in your side.

Anything more than about 6 years old will probably start to choke on your digital audio data.

Multi-core processors are more and more prevalent and are becoming a great option as prices continue to drop.

Digital effects and processing, virtual instruments, basically anything really fun will take a heavy toll on your CPU resources.

Going with hardware based effects is one way to avoid over-taxing this part of your system.

That being said, software based FX have a huge advantage in that they take up no physical space, require no additional cabling, and interface seamlessly with your DAW Recording Software.

So how fast of a processor should you get?

Now in 3 years that will be in everyone's iPhone 12S, but right now it's not too shabby.

I didn't get the top of the line speed demon, nor did I get an already obsolete bargain-bin model.

Although this is an important piece to consider in your system, even a slower processor can be jump-started with a sufficient amount of RAM, which brings us to...

Memory is cheap and the added juice will make all the difference as you get into more complex audio functions.

Depending on what operating system (32 vs 64-bit) you are running, there may be a hard limit on how high you can go.

I would suggest maxing out your Digital Audio Workstation with whatever your operating system can handle - but no less than 4 GB.

With the emergence of 64-bit operating systems and multi-core processors the upper limit on RAM has been raised to previously unheard of levels, but the story remains the same.

Get as much as you can, and always make sure you have enough to satisfy each core of your CPU.

What does that mean?

Multi-core CPUs (like the ones mentioned above) can each work independently, but the catch is that they all drink from the same combined pool of RAM available to the system.

Keep in mind that this is only possible for 64-bit operating systems that can utilize more than 4 GB of RAM.

So the bad news is that to effectively utilize a multi-core processor, you'll need to plunk down some extra cash on RAM.

The good news is that RAM is pretty cheap today and can really turbo boost your system's performance, particularly when recording or playing back a large number of tracks at once.

Spend some cash to get extra RAM in your system and you'll be able to chew up digital data like a teenager in a bubblegum factory.

How big of a hard drive should you get?

Only you can know how much is enough, but these things are dead cheap right now.

You'll need one to use for primary storage and another for backup and archiving.

External USB drives are a great option too because you can swap them out easily and they don't require you to take your machine apart.

They do, however, eat up another USB port so make sure you have one available in your plan.

The obvious stat here is the total storage capacity.

Like buying a big screen TV, go one size bigger than you think you'll need and you'll never regret it.

"This TV is just waaaay too big and awesome"

The other main consideration is the disk rotation speed (when selecting magnetic hard drives only).

Like their name implies, these drives spin a magnetic disk to store information and, as a result, can die on you if the mechanical parts fail.

Most run at around 7200 RPM, which is plenty fast, but also check out Solid State Drives (SSDs) as an alternative.

These drives use short electric pulses to store information and don't spin or have moving parts like traditional magnetic drives.

SSDs are rugged, run lighting fast, and are a great option if you can afford it, but are usually more than twice as expensive as their magnetic brothers.

One popular strategy, which I highly recommend, is to get a smaller capacity SSD solely to install and run your operating system from.

In fact, I believe that using a solid state drive to run your operating system is the BEST way to make a HUGE improvement in your computer's capability.

And since it only is used to actually run the programs, you can pair it with a large capacity magnetic drive (to handle general storage and backups) to get the best of both worlds!

Working on your Digital Audio Workstation is a lot like doing any other work at your desk.

You'll need to spread out if you want to be organized and have quick access to things, and this is no different.

As far as monitor sizes...I'd suggest going no smaller than 22".

If you have the funds you can also put 2 monitors (or more) side by side using a video card with 2 outputs.

This not only looks really sweet, but allows you to have a ton of space to work.

Nothing will stifle creativity quicker than dealing with a bunch of windows all stacked on one another as you try to uncover your application in a dogpile of programs.

Flat screen LCD monitors are so cheap now, this is the perfect excuse to finally go out and get one (or two).

In fact I believe the only place you can still get a CRT-style monitor is from a technology exhibit at the Smithsonian Museum in Washington D.C.

(I think they also have space shuttles, 1960s era Ford Mustangs, and fighter jets... so that might be a bad analogy because all that stuff is AWESOME).

Anyway, between rebates and sales at major electronic outlets, you can pick one up for less than you probably think... so go ahead and treat yourself to a couple.

It'll help your workflow and make you feel like a true, multimedia superstar.

Personally, I have chosen to go with a single monsterous 27" display that is simply gorgeous.

You may think to yourself, "Are you kidding me?  Who would need a 27 inch monitor!  That's ridiculous!".

First of all - YOU are the one being ridiculous (see big screen TV argument above), and secondly, you may be right, but the truth is that it makes a world of difference.

Besides, it's not my fault they are basically GIVING these things away right now.

Someday soon, we'll probably have computers patched directly into our eyeballs, but until then enjoy a sweet monitor setup for your home system!

I intentionally left this one until the end.

Instead of describing the pros and cons of the never ending Mac vs PC debate let me just say this:

Use Whatever You Are Most Comfortable With!

I, personally, don't have much of an option because I was raised on Windows (NOT by a pack of wolves, as I have been accused of by certain ex-girlfriends).

Since I'm very familiar and comfortable with Windows, I simply stay with them mostly out of habit.

But the reason I can get away with this is that it really doesn't matter except that some software suites are only offered for one or the other.

I know the laundry list of complaints and praise for each, I know these multi-million dollar marketing campaigns make you feel like there's a difference, but ultimately it just doesn't matter.

Don't sweat this too much, just be aware that if you are determined to use a specific piece of software to check the compatibility before pulling the trigger.

So that's my list of considerations for the physical computer part of your setup.

I geared it a little more toward those of you who are comfortable cracking open the shell of your computer and making upgrades, but the same decision points are valid when buying a brand new machine.

Even though it may all sound complicated, here's the bottom line.

If you are really serious about recording at home, you're going to want to spend ~$1000 on the computer alone.

That does not include keyboard, mouse, monitors, speakers, etc... just the computer itself.

You can consider it the "price of admission" to get into the digital recording world.

But luckily if any of you are game players, video editors, or photographers, you may have machines already that are more than enough for home audio recording.

The arguments outlined above are really just guidelines.

The truth is that if your machine is wimpy, you will have all kinds of trouble and it may be difficult to have any fun learning and getting started.

But don't despair if your computer happens to be a little under-powered, you can still record at home as long as you understand the limitations, which are mainly the use of digital effects and working with dozens of tracks simultaneously.

Both of those things will drag your system to its knees.

So if you're only trying to record you, a guitar, and some vocals you can get away with a lot less.

If you're trying to become the next boss man, beat-making, producer king pin then you'll probably need more.

When you're ready, take a look at the next 2 related segments of the Digital Audio Workstation: Audio Interfaces and Recording Software to round out your understanding of this wonderful, Chimera-like home recording beast!