Which is better for home recording?  USB or FireWire?

Though not as hotly contested as the war between PC / Mac, the battle of USB vs FireWire has nonetheless sparked countless threads in message boards across the world.

I am a proponent of equal opportunity data protocol use, so this discussion will primarily deal with the facts of each interface from a digital music perspective.

As musicians we should all be ecstatic that these protocols have been adapted to the consumer audio market because it makes our lives so much easier.

Devices that use these interface will often automatically recognize new devices and load the appropriate drivers without the use of installation software. 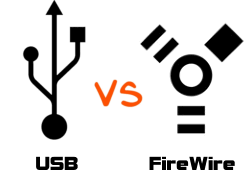 That being said, the latest drivers should always be updated at the devices website to ensure you have the most recent version.

Though you can still go down the road of using a internally mounted PCI Sound Card, the use of an external Audio Interface device has greatly simplified getting started in the world of home recording.

There are no space requirements or form factors to consider, just plug in to an available port and stick it anywhere on your desk and you're set.

So which protocol is best?

Read on to find out what you need to make the choice of USB vs FireWire in your home studio. 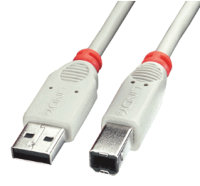 USB has revolutionized the way we use external devices with our computers.

USB 2.0 has a transfer speed rated at 480 Megabits per second (Mb/s) or 60 MegaBytes per second (MB/s), and has made it's way onto many popular audio interfaces.

Though it's rated at 60 MB/s, that's a theoretical value that is never achieved.  A more reasonable estimate is between 20-25 MB/s.

One of USB's biggest strengths is its widespread use in today's computers.

While a FireWire port is often reserved solely for Macs, most computers (both Mac and PC) have at least a couple USB ports making it a safe and popular choice for external hardware. 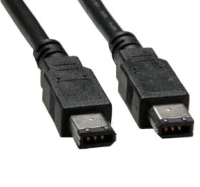 The term "FireWire" is Apple's brand name for the standardized protocol called IEEE 1394.

The most widely supported version today is FireWire 400 (IEEE 1394a).

It's rated at 400 Megabits per second or 50 MegaBytes per second, but just as with USB above this rate is never actually achieved.

An actual transfer rate of ~20-25 MB/s is also typical in real life.

The biggest advantage of FireWire in my experience is the ability to connect devices to each other in what's known as Daisy Chains.

This is a great way to expand the capacity of your current setup by combining multiple units, such as with Audio Interfaces to increase the number of inputs.

This protocol seems to be fading from newer gear being released (2012 as of this article).

However, it remains a solid choice if you have available ports on your Digital Audio Workstation.

With the correct drivers you can use both USB & FireWire on a Mac or a PC.

You can see that the true transfer rates are nearly identical, so don't sweat one being much slower or faster than the other.

Either protocol will be plenty fast for recording your music and the convenience of connecting external devices make these a no-brainer for your setup.

Buying a new PCI based sound card today would be like picking up a shiny new VCR.

It may seem like a good idea, but the technology has been passed by and it'll be tough to find support for it as Audio Interfaces (with the help of USB and FireWire protocols) take over the marketplace.

Overall it seems like the newer interfaces are tending toward the USB standard, but FireWire can still be a viable option especially for older hardware bought second hand.

If you are choosing an aftermarket FireWire card, the gold standard is the Texas Instruments chipset.

It can come on a variety of brands and you can see it listed on the specifications of the card itself.

This chipset has proven to be the most robust and reliable type for music applications.

It's the one I have in my PC that I use in my own home studio (I use both USB and FireWire devices in my setup.)

So the way I see it , as the battle of USB vs FireWire rages on we are all winners.

Why choose sides when you can benefit form both technologies?


You Are Here: Home Page > Audio Interfaces > USB vs FireWire