These patterns are a basic design element of each mic you'll consider for your studio.

Each mic will list which polar pattern it uses in the model specifications.

Most mics will have a fixed pattern, but it's becoming more and more common to see models where you can vary the pattern between different modes.

Having a good idea of what you'll be recording will help narrow down your choices.

If you want to cut right to the chase then I'd recommend a simple Cardiod mic for the true novice, but here are some of the most common patterns and a brief description of each: 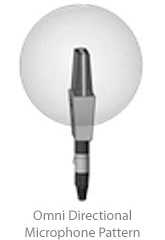 This setup will "listen" to sounds coming from all directions.

Not very useful for the studio since you are often trying to get sound from a specific source.

You can't "point" this one anywhere because it hears in all directions... 360 degrees.

Maybe fun to play around with, but you should stay away from this unless you have a very particular goal in mind.

Also in an acoustically untreated room (like what we'll be using for the most part) this introduces the characteristics of the rooms' reflections.

File this one in the "Do Not Buy" category if you only are looking to spend cash on 1 mic for your home setup! 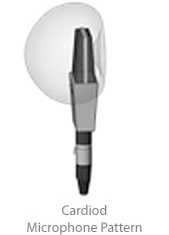 On the other hand, the cardiod microphone pattern is very common and quite useful.

Pronounced Car-Dee-Oyd, this little treat is where you'll want to focus your search to start off.

As you can see it detects sound directly in front of it but far less from each side and almost nothing from behind.

This pattern works well for studio situations where reflections are not desired or live applications where stray sounds are present.

An outstanding edition to your studio - if you are unsure about this decision, go with this one and you won't be sorry. 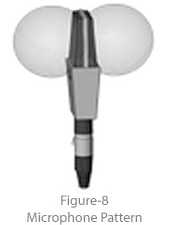 This is what would result if you took 2 cardiods and put them back to back.

It captures sounds from both directly in front of and directly behind the diaphragm input.

This might be used to capture reflections from the room to add color to the sound, but there are other ways to do this if you need to.

Once again, this is more of a specialty pattern as you wouldn't typically want to get what is on the other side of the mic from the performer or instrument.

In general - it's easiest to control what is in front of the mic, and not to worry about the rest of the recording space.

This is especially true in a home recording environment where the recording space is also your living space. 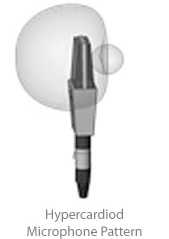 A variation of the straight cardiod discussed earlier, sometimes called a super cardiod.

This pattern is like a combination of the cardiod and figure-8.

It detects primarily from the front but also gets some signal from directly behind.

Some may want the additional sensitivity away from the sound source, but this may be risky in an untreated room, such as the rooms of a basic home studio in your house.

Probably best to leave this one for a specific need as you become more comfortable building your mic collection.

Although it IS very tempting to acquire things with "hyper" in the name... try to stick to "hyper drive" & "hyper karate style" for now.